Marietta has a passion for sewing and has been working in the industry for most of her life. When her children were young, she would put them down to sleep just in time to watch Nancy Zieman on television. She says sewing with Nancy was the only thing that kept her sane during those busy years. As her children grew up Marietta worked selling Babylock Machines, eventually deciding to open her own quilt shop and Babylock dealership.

She started her shop small with only $1,500 to buy her initial stock. Since then, she has grown the business into a nationally known quilt shop. Customers come from all over to visit the shop and Marietta is always ready to show them a new technique, tool, or machine. Many customers come for the fellowship as they have all become family over the years.

Marietta also has a passion for her community, particularly women and children who are victims of abuse. These women and their children often end up in shelters with nothing, not even basic toiletries. Marietta has organized the local quilting community to help these women. Throughout the year the shop accepts donations of travel size toiletries and feminine hygiene products. Once a year the shop hosts a huge sew in and our customers come from all over to sew and stuff beautiful zippered cosmetic bags. Marietta has partnered with the Simpsonville Police Department for distribution of these much-needed bags.  When Covid-19 prevented the annual sew in, Marietta created bag kits so people could make them at home and drop them off. Every year the number of donations grows. Last year Marietta donated over 500 filled bags and several large boxes of leftover supplies filling several squad cars and police department truck. Last year Marietta organized a group of machine embroiderers to make furry stuffed bears from the kits she provided. These bears were donated to the Simpsonville Police Department to be distributed to children at accident scenes and other difficult police interactions. This was so well received we have plans to expand it next year.

Marietta is a big supporter of our military men and women.  Marietta opens her store to Quilts of Valor of the Upstate for Quilt Presentations, provides free classroom space for the Quilts of Valor quilters to get together and sew on Saturdays, and sponsors their annual charity event and auction in Greenville, South Carolina.

Last year was a rough year in our community because of Covid. Some of the hardest hit were those men and women in nursing homes. These poor people were so isolated and lonely. Marietta wanted to do something to show them they had not been forgotten. Marietta organized our local sewists and quilters to make pillowcases for the people in the local nursing homes. The response was overwhelming. The shop took in almost 450 pillowcases. We took the pillowcases to three local nursing homes and laid them out on tables and assisted the residents to come through and pick their favorites. This is a charity event we are planning to grow in the following years as well. 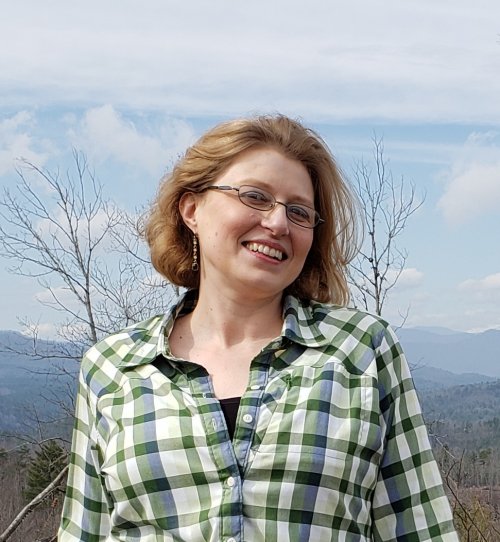 Shanon is the Shop & Event Manager but she is better known as Apollo's Mom.  She takes care of our website and helps out on the floor whenever she gets a chance.  Shanon specializes in machine embroidery and paper piecing.  She is wild for batiks and brilliant hues and patterns.  She likes to do her own thing and design her own quilts.  In her free time she likes to volunteer with the Quilt's Of Valor Foundation, scuba dive, and ride her motorcycle. 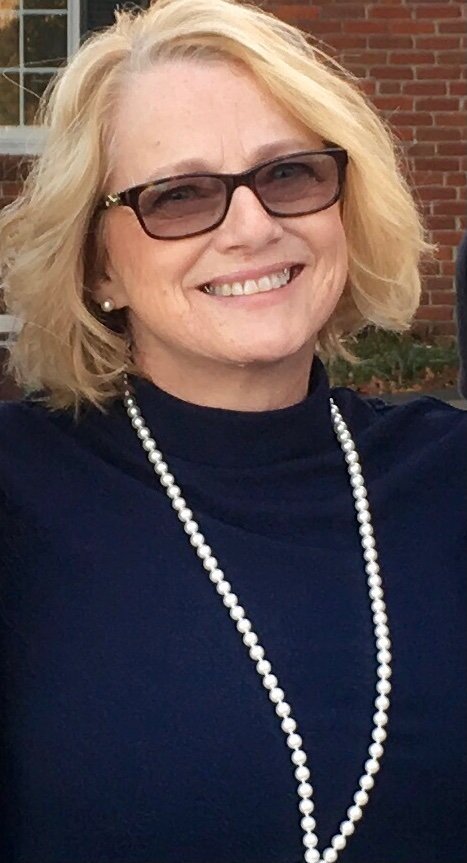 Dianne specializes in machine embroidery and quilting in the hoop.  She loves all kinds of brilliant colors but especially Pink.  She retired from Cryovac after fifteen years and is now enjoying her time with her Marietta's Family.  Dianne is an eleven year breast cancer survivor.  In her free time she likes to sew and cuddle her super sweet grandkids.... She wears the title Nanny with pride. 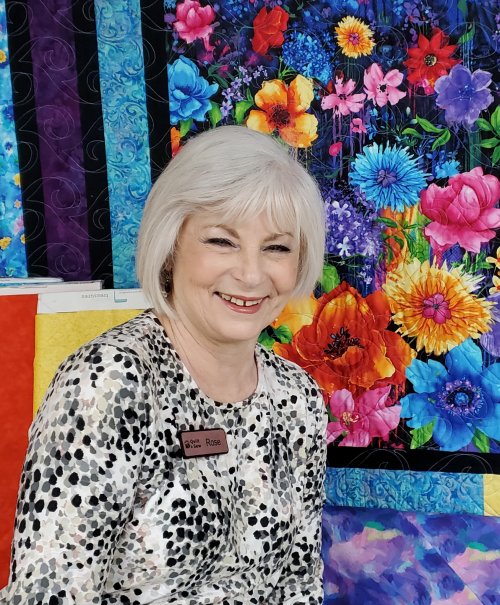 Rose is a color guru.  She puts together our three and five yard quilt kits and is always inventing new variations for our Fat Quarter Bundles.  Rose is from the great frozen North East.  If you need to know anything about Janome machines, she's your girl!  She enjoys the beautiful southern weather, good roads, and anything Pink. 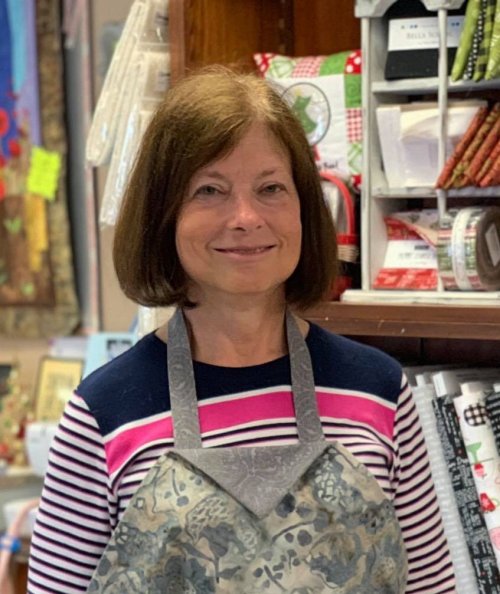 Debbie is always in the back office.  She keeps busy doing all the ordering and receiving that keeps our shop humming along.  Debbie specializes in embroidery, and longarming.  She enjoys learning new things on her Solaris 2 and creating exciting new embroidery and long arm designs on her Pallette Software.  Debbie is a dog person.... which makes her A-OK in Apollo's book. 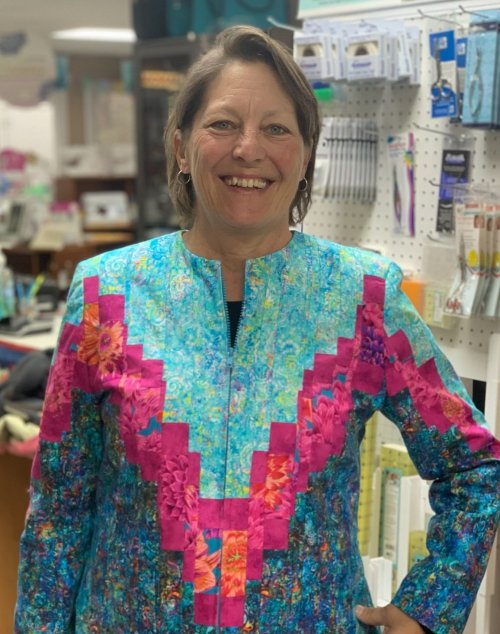 If you've stopped in on a Saturday you've probably met Ruth.  Ruth is a gem in a quilt store because she specializes in sewing clothing!  Ruth is our go to expert on all things serger related.  She likes creating fun new clothes, taking long walks with her dog, and above all golf.  Ruth is here every Saturday, the rest of the time you might only catch her here if the golf course is closed. 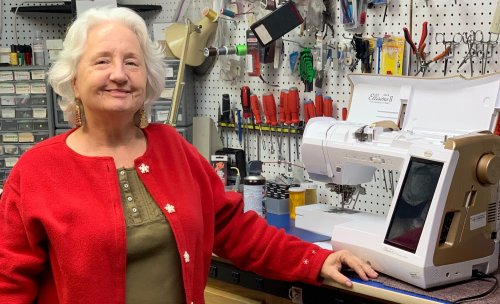 Teresa is the "swiss army knife" of the quilt shop because she does it all  She started at Marietta's as the back up sewing machine technician. On Tuesdays she works in the repair shop servicing sewing machines and sharpening scissors. On Fridays and first Saturdays she works on the sales floor and, on other days, she teaches basic quilting and binding.  Her favorite challenge is to design a quilt to showcase a particular fabric or panel.
Teresa began quilting in 1998, starting with designing on graph paper, cutting with scissors, and piecing and quilting by hand. She still enjoys hand work but now sews most of her quilts by machine and quilts them on her Baby Lock Regalia.  She has completed over 100 quilts from mug rug to king size.  Her favorite projects combine different techniques and interesting color combinations.
In addition to quilting, Teresa and her husband foster baby kittens and tend their flower and vegetable gardens. 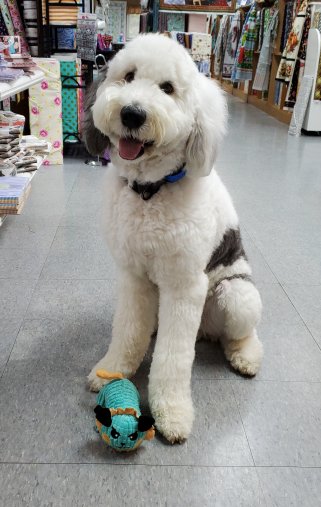 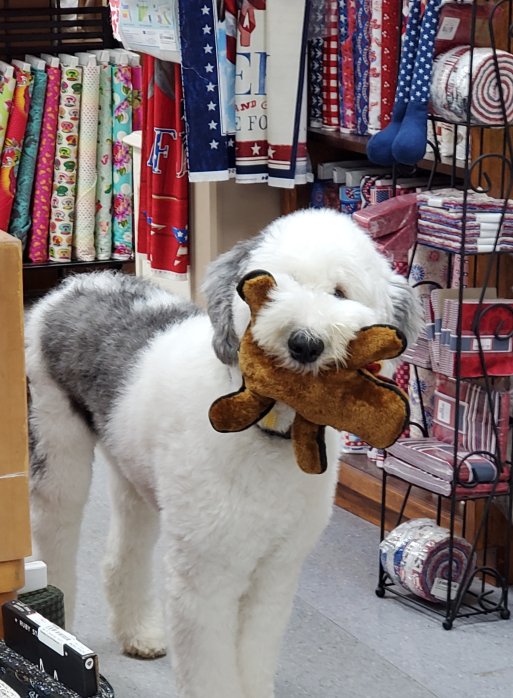 Every Quilt Shop needs a greeter.  Here at Marietta’s Quilt & Sew we have Apollo.  Apollo is a Sheepadoodle but he is really more sheep than doodle.  His momma was an Old English Sheepdog (OES) and his daddy was half Standard Poodle and half Old English Sheepdog (OES).  Apollo was born right here in Upstate South Carolina just outside of Easley.  Apollo has been coming to work with Shanon since he was eight weeks old.  You will often see Apollo pop up in our live videos on Facebook.  He really is a glory hound and never misses an opportunity to pose for a picture or jump into a video.

Lots of people come in to see him, he kinda has his own groupies!  He works every Tuesday, Wednesday, and Thursday.  We pay him in cookies, blueberries, and lots of attention.  We get lots of questions about him.  Here are the most common:

Does he shed?  Not really, the little bit of poodle in him prevents most shedding.  He spends about fifteen minutes a day getting fully brushed out and any loose hair gets picked up in the brush.

How do you keep him so white?  Apollo gets a bath every Monday so he will be fluffy and ready to meet all his fans during the week.

What happened to his tail?  Since he is mostly OES his tail was docked at birth.  All he has is a little nubbins which we keep trimmed into a puff ball.  Since he can’t wag his tail he just wags his whole back end when he meets his friends.